My practice incorporates painting, drawing and the making of prints and my prints come in a variety of mediums.

I have made reduction woodcuts, multi-plate woodcuts and jigsaw prints from being an exchange painting student at NSCAD in Halifax in 1989. (Money was in short supply and I went round the studios picking out scraps of ply from the bins and used the sticky printshop inks that were left out after a day’s teaching class. I would make prints with the ghost images of other peoples compositions and try and work their languages into my own.

It was winter, so cold and blowy, and working in the rambling low ceilinged workshops was like being in a ship in a snow storm. Everything creaked, the polished floors, the doors, even the Charles Brandt presses! It was an intoxicating time for me to be alive, and as the studios never closed round the clock – it was an art school perfectly suited to my topsy-turvy open at all hours way of working! And there were a bunch of fellow students, Maria Elger, Monica Tapp, Ian Hobson to name a few who would do the same. )

Nowadays in the London studio we focus most time on relief process, but this had a long gestation. I had really started making monumental woodcuts in 2002 when The Arts Council gave me a grant to make two images, Horse in Snow and Honeymoon. I wanted to try to paint and print images in sync in both mediums so that aspects of each process I liked would feed the other. 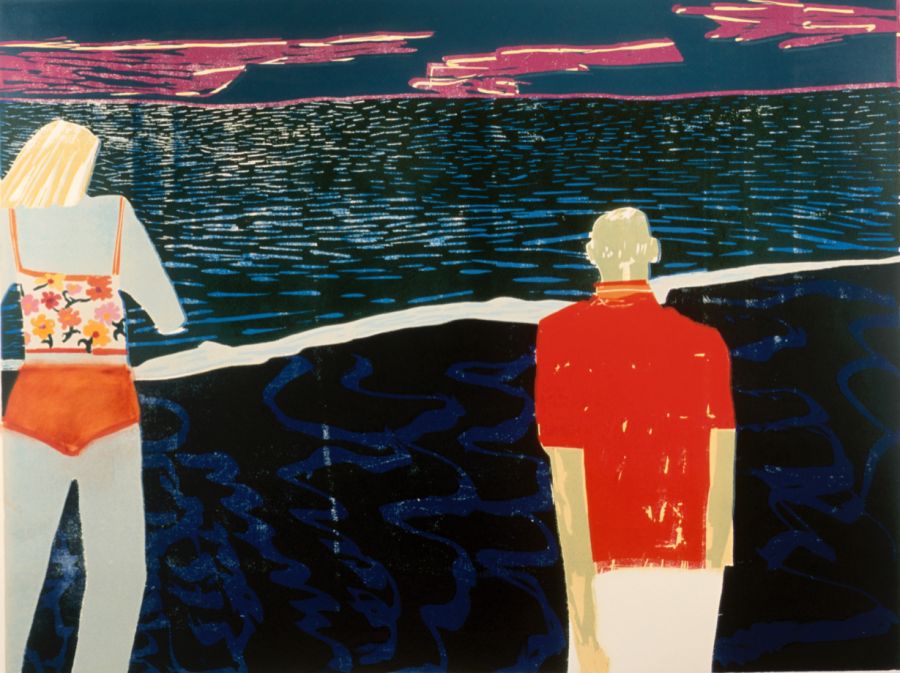 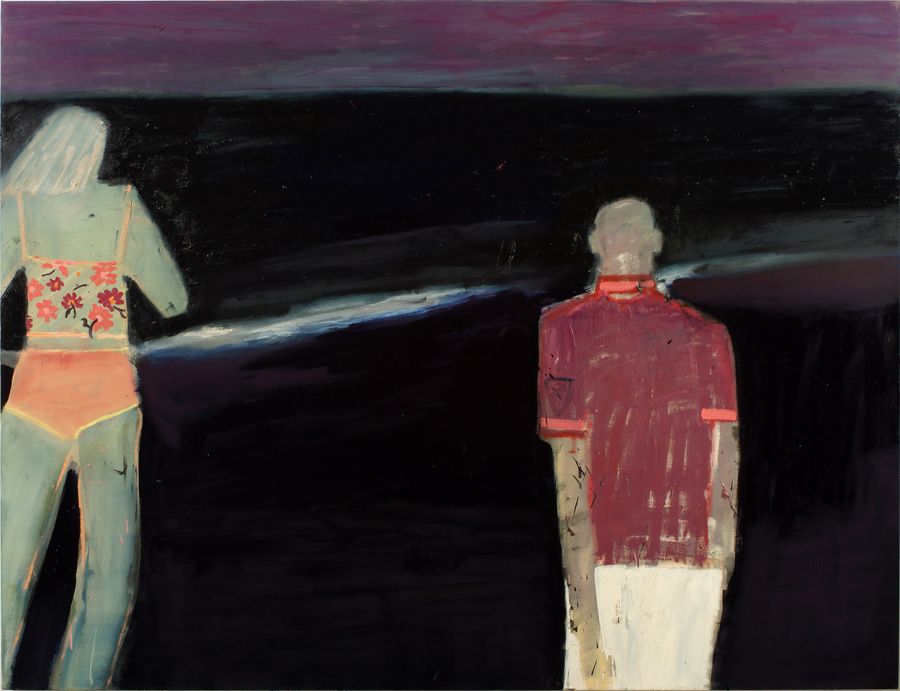 This cross-fertilisation between the languages seemed to have great potential for me at the time where seat of your pants painting could enhance print; while the staging of print, layer upon layer, could add to a painting process that needed to be stratified and left on hold. 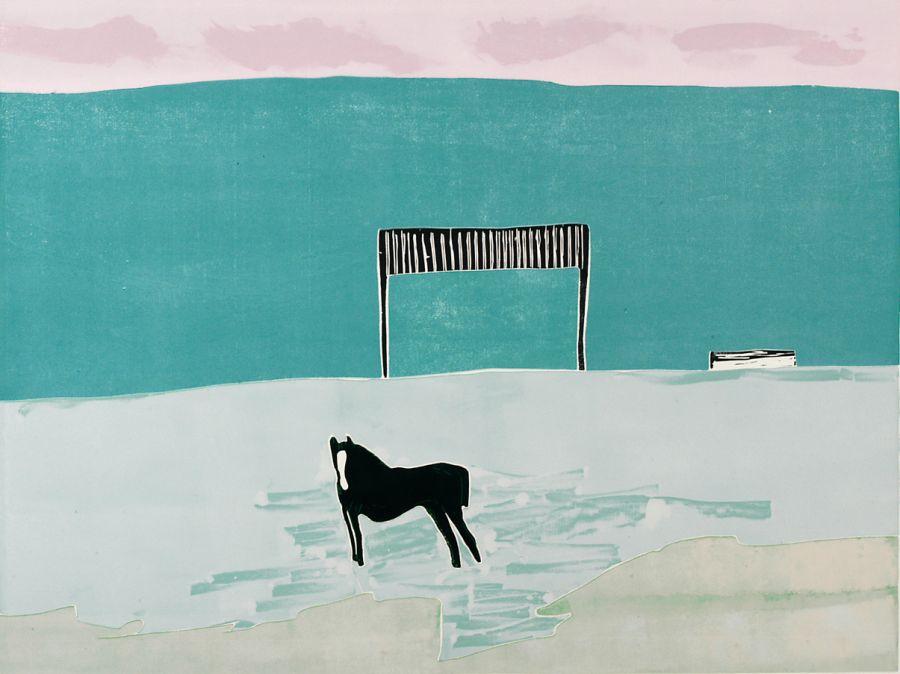 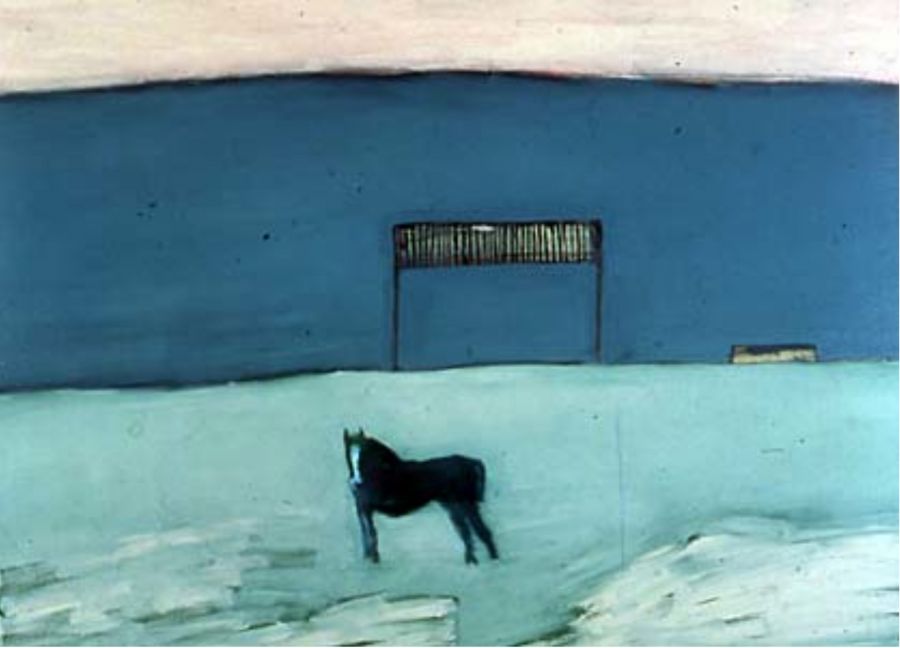 I was searching to find a way of painting that allowed for intense bursts of activity between a punishing teaching regime. Painting in layers, and using fore and after knowledge of where an image might be able to go if the process was turned into a sequence of stages seemed at the time to be the answer to my displaced life and a frustration of not being able to paint wet on wet.

Relief printing, where ink is rolled and or painted onto the surface of a piece of wood is initially very direct, and if one is making jig-saw woodcuts it is an extremely immediate way of making an image. Pieces of a block are cut up into areas and inked in different sections, reassembled and passed through the press.

Munch used this minimalist approach in his work. See his sublime Women on the Beach, c 1898. 45 x 51 cm. Private Collection © Bridgeman. The simplest of images, with a diagonal line separating sea and land, this delicious melancholic woodcut is made from rough timber, so raw and unfinished that the saw marks from the lumber yard add to the surface patina of the print. Four colours in ink and the white of the paper with a lot of plate tone adding atmosphere to the drama. It is for me a work of genius.

Munch re-inked the blocks of a particular print he was working on in different colour ways, sending an image to different emotional parts of the spectrum. This seems perfectly normal to me but few artists work this way- perhaps in part because print studios need to make a living and the exact editioned multiple is a source of income between the studio, a publisher, a gallery and finally the artist.

Through Munch’s genius and his image anarchy, by making prints ‘in-house’ so to speak, I have found myself working in a similar vein. My editions are usually variable ones, though not as variable as his. I like the painterly fluidity and flux it brings to the process of creating an image. And I like the way I can conjure quite subtle subtexts in a narrative composition by not slavishly cloning an image from a BAT copy. (BAT in French literally stands for Bon á Tirer ‘Good to Pull’.This is the first impression of the work that is deemed as good as it might get, and the one that is used to judge all other impressions in the edition.

The BAT indicates the artist’s authorisation to proceed with the edition of a print.) Perhaps too there is an element of boredom that sets in in making an edition of prints that are matched to a BAT? And I have to concede that the exacting skills needed pull this off are not my strong points.