Using this method of relief printing, the ink is rolled and/or painted onto the surface of a piece of wood. The surface of the block is cut away or reduced between each layer.

This produces rich, layered, painterly prints. It is a complex process as each colour is printed in succession from the same wood block, pieces of a block are cut up into areas and inked in different sections, reassembled and passed through the press. The whole edition has to be printed at one time because the plate will change after every colour, this results in editions variable.

As an example The Sociable Time, below, illustrates where three sections of the image were jigsawed into separate pieces. The figures were carved away so the paper becomes a colour. Where the jigsaw blade removed a slither of the block the effect of a drawn line silhouetting sections of the image was created. 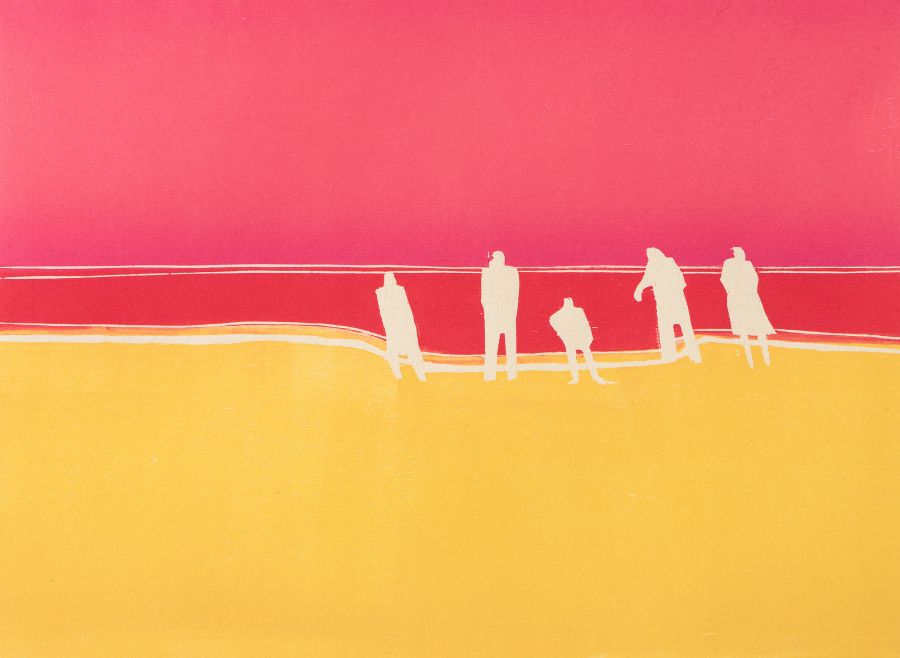 A print produced by the process of etching, uses a technique whereby a chemical action is used to produce incised lines in a metal printing plate. This is referred to as an intaglio technique. The incised plate is placed against paper and passed through a printing press with great pressure to transfer the ink from the recessed lines forming the image.

There are many ways to create an etching which are often used in conjunction with each other. Tom often experiments with a combination of different methods.

Drypoint printmaking uses an intaglio technique, an image is incised or scratched into a plate with a sharp-pointed implement. The marks created hold the ink, when it is wiped off the plate, this sunken image in turn transfers to paper to create the printed image. This delicate method usually produces a small edition of prints. This method can be combined with other print methods too.

Another intaglio printmaking technique, it works like etching but only produces areas of tone rather than lines. It is often used in combination with other intaglio techniques.

This type of printmaking involves drawing or painting on a smooth, non-absorbent surface or matrix. As its name suggests produces a single unique print, colour and textures are added to create the image.