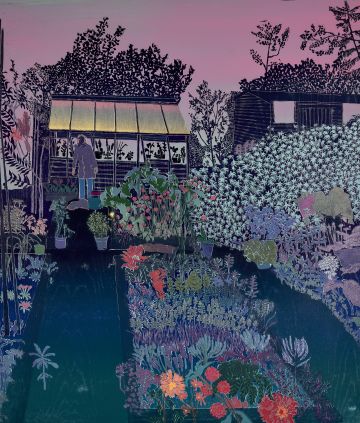 This monumental woodcut, in an edition variable of 20, with several artist and printers proofs, was made over 6 months in my Bermondsey studio.

It all started from drawings made and photographs taken while I was staying for several weeks with my sister Kate in the early summer of 2021. We had just come out of lockdown and it felt incredible to be out and about and in company. In the course of my time with her, I noticed how her working day was spent in the garden, from breakfast to beyond dusk. Her garden, cut into the edge of a hill near Shaftsbury on the Dorset/Wiltshire border, while being edenic, requires a huge amount of time and physical effort to look so ravishingly natural where plants, flowers and vegetables all vie for attention in close proximity.

I wanted this woodcut, and a couple of attendant paintings, to try to carry the cacophony of colour, noise and shape in this corner of the vegetable garden. When I was there drawing away, the whole scene seemed almost quantum in it’s complexity and this sense of inclusion I wanted to achieve meant we had to literally ‘build’ a very detailed image. I started on the oak ply plate by drawing everything out in brush and ink. These black lines were then carved away. While this was going on, we painted backgrounds in stripes of delicious gouache colours. Once the line plates had been carved out we inked up large patches of the plate in different greens and blues (for the leaves of the plant) and printed this patch work quilt of colour on top of the gouache background and this gave us a very confusing image of abstracted colours with ribboned lines where the gouache was revealed. This reduction process was repeated about ten times for each layer of the print. After the removal of sections of the plate and each subsequent printing the whole woodcut gradually revealed itself out of the chaos. This image was fiendishly difficult to trust because the process is so back to front that only in the later stages of the printing and carving could we begin to see what we had previously imagined. Each impression from the edition of 20 expresses a slightly different time of late afternoon and evening reminding me of Monet’s series Haystack and the facades of Rouen Cathedral (though of course in his case he was painting en plein air and he had the extra impossibility of trying to realise what was physically in front of him in a snapshot). – TH 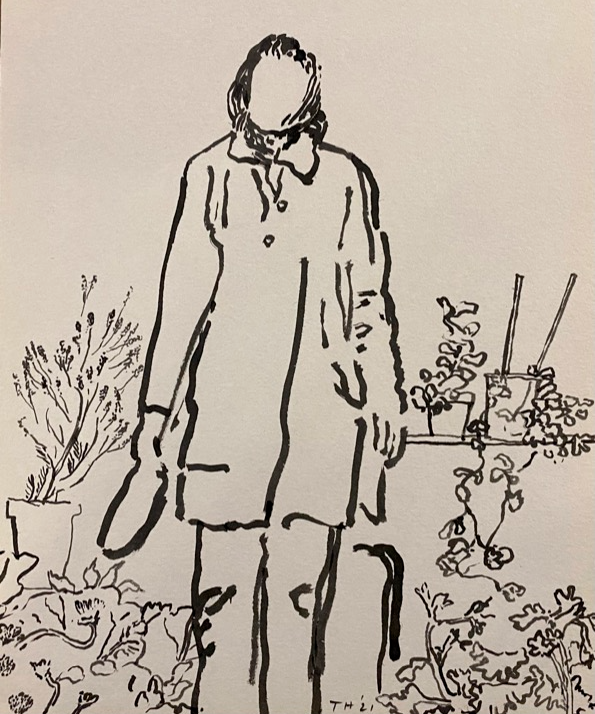