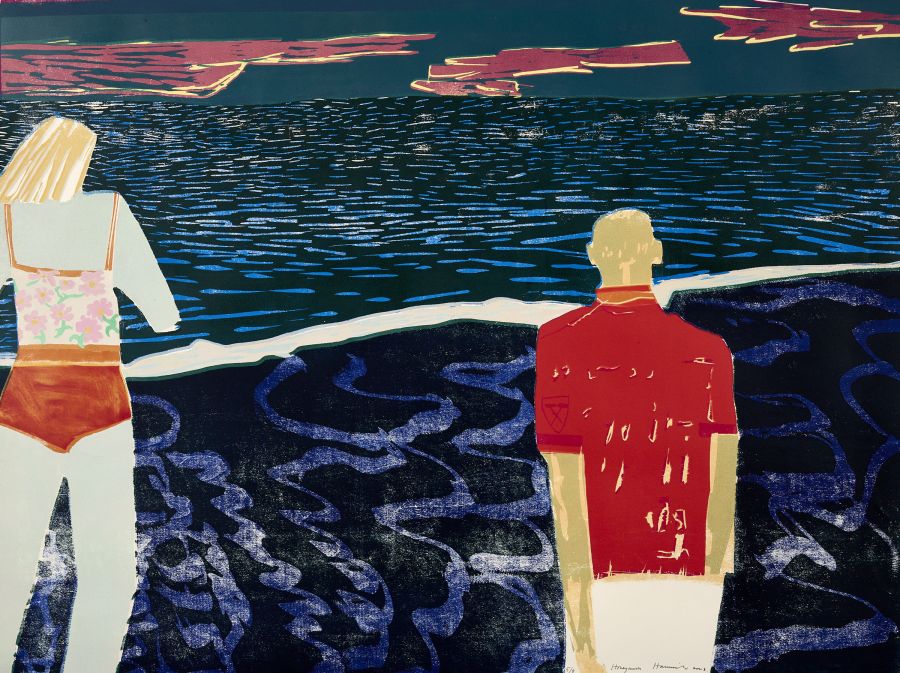 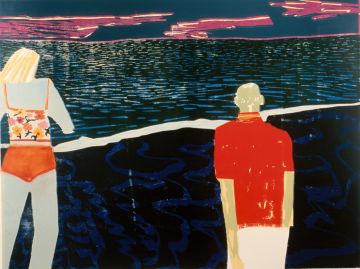 An impression from the edition has become available. Please contact sophie@hammickeditions.com for further information.

This print came a year after the painting of the same title, but through making the woodcut I was able to resolve part of the composition by removing a figure from the image. I then went back to the painting and took the third figure out. Since around 2002/3, this process of flux between finishing paintings and prints of the same subject matter has become more of a working process. I now tend to make prints and paintings with the same subject matter at the same time, going back and forth between the two studios.

Honeymoon and Horse in Snow were made from an arts council grant bid that funded the production of two monumental woodcuts. Honeymoon is a direct transposition of a painting with the same title. I had been working at Nova Scotia college of Art as a tutor and some summer evenings were spent near Peggy's Cove outside of Halifax. I liked watching how visitors to the sea invariably become very contemplative when looking out at the horizon. These figures were inspired by real life observations. I noticed that this man was very self contained while his partner seemed to be much more interested in what we made of her rather than her relationship to her man. There was a peculiar triangle of gays that led me to a dark narrative about their future that might or might not have materialised. Despite the title of this piece and my interpretation it already doesn't seem to be a bed of roses. I made these prints with Pete Kos and Rob White at Thumbprint editions. I love the way both these artist printmakers were able to help me cut to such economy when arranging very simple figure and ground relationships across the picture plane. I found the inking of the first layers initially too thin and worried that the whole image would end up too fuzzy but actually this under inking created movement and vitality within the woodcut that I really like now. It's a way of working using thin ink that I have returned to in recent years. We hand painted her top and bottoms which adds to conjuring her frisky movement and sense of edge; of course putting her on the edge was very conscious. – TH