Tom Hammick was winner of the V&A Prize at the International Print Biennale, Newcastle, 2016

The V&A has collected the best of contemporary printmaking since its foundation and now has an internationally renowned collection of modern and contemporary prints. For this reason the V&A has been closely involved with the International Print Biennale in Newcastle since it was established in 2009. The biennale is the largest printmaking event in the UK and attracts submissions from artists around the world. The selected artists are featured in exhibitions around Newcastle. The V&A is one of a number of organisations to offer a prize at the Biennale. 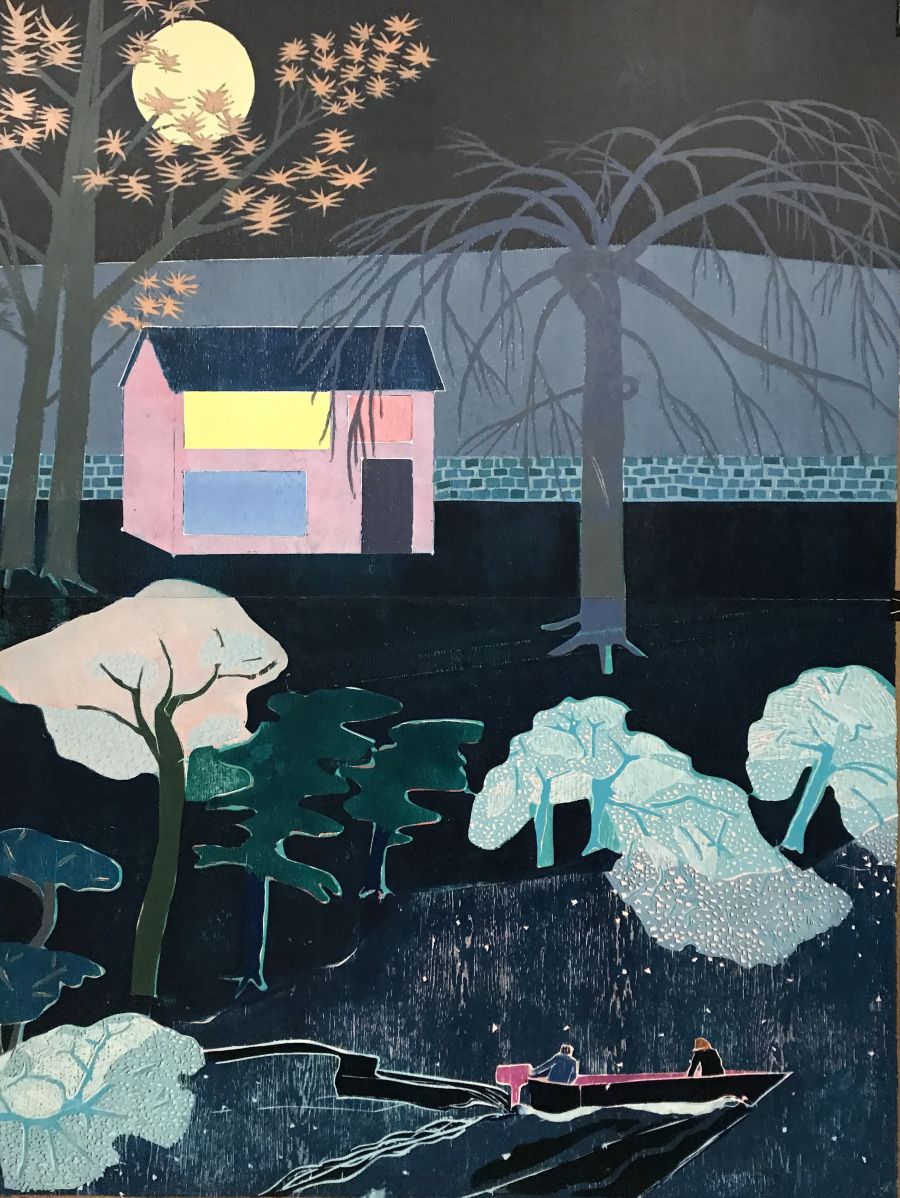 Tom Hammick was the winner of the V&A Prize at the International Print Biennale, Newcastle, in 2016, with his print, Violetta and Alfredo’s Escape, 2016, which has since been acquired into the V&A collections.

Tom Hammick’s woodcut prints draw on a rich array of influences and inspirations from art and literature which are subtly melded to create an extraordinary personal vision. The compositional strategies seen in Japanese prints and Chinese scroll paintings bring a distinctive flavour to his work, whilst from the German Expressionists he has learned how to exploit the emotional impact of colour. He has described landscape in his work as a metaphor – for the human condition, for states of mind, or as a way of expressing ideas about transience, fragility and awe. No longer about the actual experience of natural phenomena, his work increasingly features what he calls an “imaginary and mythological dreamscape.”

Hammick is a painter as well as a printmaker, and his colour woodcuts are ambitious in scale, holding their own beside his paintings, each drawing the viewer into a mysterious narrative. The landscape settings, the unsettled perspectives, and the uncanny atmosphere create a hermetic world suggestive of fairy tale or myth. Often working through the night, Hammick has become a genius of light, conjuring dusk or dawn or moonlight with his palette of mutable un-nameable colours. When a house is featured, as here, it is lit from within, the windows and doors glowing like coloured paper lanterns.

The ambiguous space of the picture plane, opened out and flattened, combines conflicting perspectives – here Western conventions are applied in the upper half of the composition, with an artificial aerial perspective borrowed from Japanese prints shaping the lower section. The space also resembles the trompe l’oeil of a stage set, and the flats of theatrical scenery. This is apt, of course, for Hammick has often been inspired by opera. The subject here is his interpretation of a scene from Verdi’s opera La Traviata (itself based on Alexandre Dumas’s novel La Dame aux Camellias). It pictures the lovers’ escape from Paris to live together in a secluded country house. This sojourn will prove to be only a brief idyll – a moment out of time – before they are torn apart once more. There is a powerful mood of stasis in the picture – of the action being stilled or becalmed – that enhances this idea of private reverie. The landscape itself seems to belong to a realm of magic in which all seasons exist simultaneously, with the starry leaves of one tree contrasted with the bare branches of another, and yet others heavy with blossom, scattering petals like confetti on the water.

As so often in Hammick’s pictures the figures here – Violetta and Alfredo, in a boat approaching the house that will be their temporary refuge – are turned away from the viewer, as if to emphasise a separation between their world and ours.

Hammick is an ambitious and inventive printmaker. All printmaking is on one level an exercise in guesswork and experiment, chance and accident, but perhaps no process is as challenging and risk-ridden as colour reduction woodcut. Rather than printing each colour from a separate block, the artist works with a single block, cutting it away in stages and printing each colour on every sheet in the edition, before cleaning and cutting the block again, to print the next colour. Working in this way there is no scope for revision, and each decision constrains the one that follows. Like a complex puzzle, each step must be worked out in relation to what follows and precedes it, whilst keeping the final destination – the finished image – firmly in mind. In each hard-won finished print, Hammick makes no attempt to conceal the evidence of process and making. Indeed this evidence contributes some essential character to the image, bringing in a fluctuating tension between the pictorial illusion of space, and an insistence on surface and materials. Here for example, the large scale of the finished work required him to print it in two parts on separate sheets – the join is clearly visible as a horizontal line across the middle, so that the top of the blossoming tree on the left is printed in a different shade of pink to the mass below, and the roots of the leafless tree on the right are browner than its bluish trunk. Hammick further complicates the process by introducing subtle variations to the colours in the edition, ensuring that each impression is unique.

By choosing to print from woodblocks, Hammick also introduces other characteristics. Following the example of one his great heroes, Edvard Munch, he prefers to work with blocks and boards which have a distinct grain. He makes deliberate use of the woodgrain, often inking it unevenly, so that its striations animate the layers of colour to give a shimmering texture to features such as sky and water. We see too, how he has built up areas of colour by layering pigments, dark tones over light, so that certain shapes bleed at the edges and appear as if they are backlit – another theatrical effect achieved through the printing process itself.